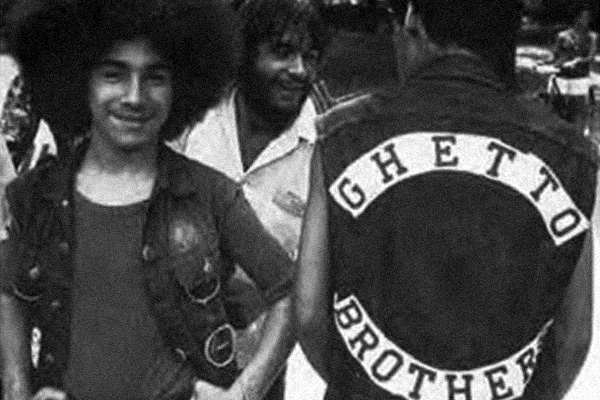 “Girl From The Mountain” (snippet)

“There is Something in My Heart” (snippet)

I recently interviewed Benjy Melendez of the Ghetto Bros. on his incredible story and the music that accompanies the Ghetto Brothers’ legacy. It’s a record that’s not only considered a ‘holy grail’ for collectors but it also serves as a juxtaposed soundtrack for the violent, fiery Bronx where it was made. I say juxtaposed because you figure an album made by gruff street gang members from the ’70’s Bronx wouldn’t be as sugary as it is. But the GB’s lone output turned out to be a mix of Latin garage-rock, Santana, and The Beatles, some of which were anthemic in a political sense but most were just wide-eyed love songs.

I could do without the Santana nods but above are my favorite joints from the album which FINALLY got the proper reissue treatment from Truth & Soul Records. You can read my story with Benjy in the upcoming Wax Poetics and in the meantime check out a recent review HERE.

Did a local story on Vietnam’s first ever rock recording artist. Her songs are incredible and what a life she’s had. At 76, she currently lives in San Jose. Really grateful for her and her daughter’s time. The vinyl will be out on @sublime_frequencies this March. On one of her songs, from 1964, she wisely sings: “Look back on your journey and let things go.”
Really wholesome community event happening today. Consideration of attendance is greatly appreciated.
🙏🙏🙏
Just announced! The upcoming Wax Poetics coverstory features my in-depth piece with Preemo on the making of Gang Starr’s masterpiece, Hard To Earn. Thnx to the whole team and Preemo for all those hours of humoring me. Excited and cannot think of a better way to celebrate Wax Po’s 20th.
Posted @withregram • @cutchemist Welp the cat is outta the bag. This was such an honor to work on. I hope everyone enjoys when it drops in October #Repost @sklutecase with @withregram
First time hanging with these guys in awhile. Added bonus: a friend of the podcast and wildly inventive artist @fattonyrap came by just to say hi, so we took him to our favorite spot, @needletothegrooverecords. Working on a bunch of stuff but it was nice to take a second and breathe.