“Why (It’s A Shame)” by Corinthian Singers

Numero’s new project is a stunning one– even by their high standard of excellence. Boddie Recording Company: Cleveland Ohio tells the story of Thomas Boddie, a young man whom upon returning from WW2 used his army money to buy recording equipment. Thomas was always curious with electronics, building his first studio in the early ’50s in his own basement. In 1958 he founded Boddie Recordings–one of America’s first black-owned recording companies–jointly ran with his wife Louise Boddie.

There the couple did everything in-house, recording anyone who wanted limited pressings of themselves, quick and cheaply. Thomas even fashioned equipment for a portable set-up allowing him to capture all kinds of events and live performances. Between 1958-1993 Boddie recorded over 10,000 hours of tape and put out 300 LPs and 45s. They pressed their own records and even started small labels just to keep their output ongoing.

They were Cleveland’s first black-owned recording company and ended up being Cleveland’s longest running studio, dubbed “Little Nashville” by traveling gospel groups who’d pass through over time. There is so much more to this incredible story; of course the music is stellar but the photgraphs of Mr. Boddie’s contraptions are astounding. Mr. Boddie sadly passed away on his 84th birthday in 2006.

The cats at Numero aren’t known for ignoring details and Boddie was a massive undertaking in a myriad of ways. Once inside, the sheer amount of material to sift through was itself staggering. In all, the process took close to 5 years to complete according to Numero.

Part of the team who put this together is Dante Carfagna, archivist, DJ, occasional producer, and writer who’s currently at work with DJ Shadow on a book about 45s–specifically, an annotated discography of every (possible) funk (or funk/jazz/soul related) 45 released between ’66-’77. He was a huge factor in assembling one of Numero’s finest releases, Eccentric Soul: The Prix Label and was also pivotal behind Boddie. Here, Dante debriefs a bit about Boddie and describes some of his own background in the business.

Quickly introduce yourselves for our readers.
My name is Dante Carfagna, content provider for the stars. Virgo. Wearer of Filson jackets and Bemidji shirt-jacs. Still sport Dickies with a cuff and a crease.

What was your main role with the Boddie project? Are there any particular songs that grabbed you the most?
I had been collecting and keeping track of the objects manufactured by Thomas and Louise Boddie for some time. There came a critical point… where it was obvious that all of their work needed to be assembled and broadcast to a new population of ears. I navigated through their legacy and determined which items needed to be focused on. I don’t have a single favorite track on the compilation, but I admire the sounds of Creations Unlimited and the Inter-Circle greatly.

How did your initial involvement with Numero Group begin?
I’ve known Rob Sevier for some time through music. I think my monthly Sheer Magic night at Danny’s Tavern may have planted a diabolic seed in the brain of Ken Shipley. Minister Tom Lunt I met only after visiting the Numero office for the first time. Sad to say, but I think they really only want me for my record collection now [laughs].

What struck you most when you met them?
Their deep lack of any kind of sartorial sense.

So you’ve been with Numero quite some time now? What other releases have you assisted them on?
For the most part, I’ve assisted Numero with nearly every release in their catalog, but I’ve been most involved with Lowlands, Prix Label, Smart’s Palace, and now, Boddie Recording Company.

So where do you draw the line between being a ‘collector’ versus an ‘archivist’ Surely the latter entails a sort of professional approach to documenting music. But for some such as yourself, is there a big difference?
If you ever collected baseball cards or comic books, you’ll know that there really isn’t any difference between collecting, assembling or archiving. Records are no exception. They have numbers, they have imprints, they are issued in a serial manner. It’s natural for one to want to collect something that can be put together to form a bigger whole.

What would you say, besides the great amount of music on here, should listeners take away from this Boddie release?
That this beautiful couple on the east side of Cleveland were the de facto Folkways Records for an underserved musical population of Northern Ohio. Aesthetics had little or nothing to do with the Boddie’s operation on a daily basis. Yet they managed to paint a real and vivid sound portrait of an entire scene without really knowing it.

What was the process of putting this together like? Was it a very personal exchange or more business? Were there obstacles that almost kept it from seeing the light of day?
Putting it together was actually a very exciting prospect, as the studio was pretty much intact when we entered its doors. There were hundreds of tapes, many sitting on the same shelf for thirty years, so the mystery was deepened to mind-numbing levels when you considered what might possibly be on any one of those reels. The only true obstacle was allotting the time to actually sit through so much volume of material.

Why were certain tracks (that were on the record store release of Boddie) omitted from the final boxset?
The Record Store Day exclusive was a compilation of things simply manufactured at Boddie for individual clients, not anything the Boddies themselves had a productive hand in. The Boddie Recording Company boxset compiles recordings that were issued on the couple’s in-house labels, which were often recorded by Thomas himself in his studio on Union Avenue. 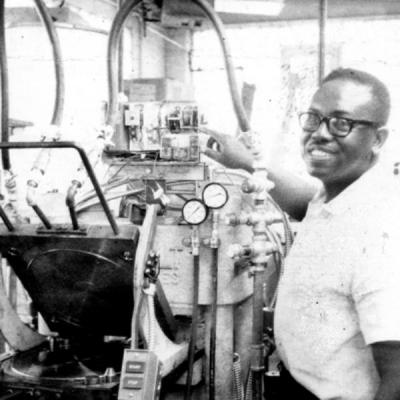 (Thomas Boddie, pictured above at his vinyl plant)

With all the music to sift through, were there any tough choices left off the project?
I feel for the most part every indicative recording has been included in the boxset.

Let’s shift gears and talk about your personal background a bit, especially since you don’t do much talking in the press. Most likely heard of you when you were part of DJ Shadow’s and Cut Chemist’s Brainfreeze tour. What is the connection between you and Professor Griff? How was eventually working with him?
I had tons of records in high school and Griff was my neighbor in North Miami, Florida. Apparently the musical vibes were strong enough to lure him over to my folk’s place and strike up a relationship with a white wimp attending North Miami Senior High. Griff was a pretty intense person politically, but deep down I think he just wanted to be behind the SP-1200 at all times, scanning records for breaks, and making real hip-hop music. Somehow we got along fabulously, and I appreciate greatly the time I spent with him during my formative teenage years.

What’s your favorite P.E. album? Favorite song?
I kind of read Yo! Bum Rush The Show, Nation Of Millions, and Fear Of A Black Planet as a triptych, representing the group’s ultimate large-scale work. Today if I picked a favorite P.E. song it would be “B-Side Wins Again,” but only the original version on the Black Steel 12-inch.

Besides the Brainfreeze tour, what’s your connection to DJ Shadow? Briefly touch on that book on 45s that you two have been working on.
I was introduced to Josh Davis through Chris Veltri of the Groove Merchant record shop in San Francisco. We met before the explosion of the Internet, and there were very few younger dudes interested in obscure local soul singles, so naturally we found much to learn from each other. Still that way today, in fact. Our encompassing funk 45 book will probably be done by the time no one cares about funk 45s anymore [laughs].

You’re also involved in a website called Ohio Soul Recordings? Tell folks about the site.
The site is pretty basic. It’s essentially an effort to catalog all R&B and soul music made on 45 RPM records in the state of Ohio after 1964.

What records have you been into lately?
Right now I am listening to Jay Chattaway’s soundtrack for the 1980 movie Maniac. The track that colors the grisly shotgun scene that dispatches the young couple in the car is totally intense. Also next to the turntable is The Sitting Room by Anne Clark, which I assume I could listen to next.

Thanks for your time man. Any last comments for readers?
If you make vinyl records, please do not put URLs or website addresses on your album covers. It’s 2011, the internet is an everyday reality and that shit’s just tacky.

*Thanks to Dante for lending his time. Please check out the absolutely stunning Boddie Recording Company, available now at Numero’s Site.