As a child, shooting hoops in my driveway, I knew every angle off the backboard, every crack in the pavement, every boundary real and imagined. Though I had a group of neighborhood kids I regularly played with, I spent a lot of time shooting, dribbling, and daydreaming out there by myself. On the days when I had a particularly good day shooting, I felt like I could play with, and maybe even beat Michael Jordan. I’d practice last-second buzzer-beaters, high-arching shots over his outstretched fingers, and I could practically hear the applause when I, a short, chubby kid with minimal skills, improbably succeeded in beating the best to ever pick up a ball. I would relish the fantasy until the streetlights came on, take a long drink from the hose, and then go inside, eat dinner, and do my homework. What I didn’t do was spend the rest of those idyllic evenings stitching a crude replica of my imagined uniform, forging elaborate scorecards of the epic one-on-one battle, and recording my own Sportscenter-style highlight tapes documenting the historic event. If I had done all of that for about fifteen or twenty years, without telling anyone, all the while diligently shooting threes from the sidewalk and waiting for the moment when a wayward NBA scout came trolling for talent down Edenwood Drive, I might have been a sort of basketball version of Mingering Mike.

The strange saga of “Imaginary Soul Superstar” Mingering Mike, familiar to readers of Soulstrut and Wax Poetics but basically unheard of in the world at large, has gotten much more interesting in the past months with the release of a definitive book-length account of his career and the 45-only release of one of his few recordings.

The book, written by the sensitive and savvy crate digger Dori Hadar, who originally discovered the cache of Mingering Mike records at a Washington, D.C. area flea market, is essentially a collection of high-quality reproductions of Mike’s incredible art work and a brief biography that works toward answering the many questions one has when faced with the fascinating artifacts of a decades-long imaginary career, namely “Who is he?” What motivated him?” and What happened to him?”

In short, he was a shy and eccentric young man with a deep love of music and few social skills. He filled countless hours crafting a wide array of fake album covers, and in many cases, cardboard stand-ins for the records themselves, which he imagined as abundantly successful yet socially conscious soul hits. The imagined albums were to have been written, played, manufactured, and marketed by Mingering (you’re gonna have to read the book for the origin of that peculiar though appropriate moniker) Mike himself and his associates, most of whom were based on his family members, many of whom were assigned proto-hip-hop-sounding aliases, including Audio Andre, Joseph War, Miss Fly Darlene, and his constant companion, the Big “D.” Mike, who prefers not to be known by his full name, is alive and well, resides in the D.C. metro area, and is pleased but slightly embarrassed by the recent attention paid to the products of his youthful introversion. 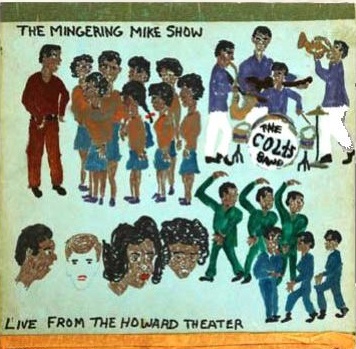 The sheer range of artists, labels, and records that Mike created, many with detailed back stories and liner notes, makes the archival process worthwhile. Part of what makes the covers so fascinating is the scrupulous attention to detail they display. As an avid though financially limited record collector, Mike had an eye for assimilating the prevailing design elements of the heyday of soul into his own paint and marker creations. He was careful to include minutia such as catalog numbers, label logos, publishing information, and recording dates. In some cases he went so far as to carefully ease his covers into shrink wrap and re-apply price tags from various local stores. These elements in particular drew Hadar’s initial attention. He thought he had discovered an unknown musician, when in fact he had stumbled onto something much more interesting: an artist who had created an intensely personal body of work, hidden away for decades for fear of misunderstanding, whose time had finally come. Because so many of us reformed hip-hop enthusiasts are fascinated by and devoted to unearthing under-appreciated artifacts from the underbelly of American soul music, Mike’s work will be seen, and in one small instance, heard, by the curious and receptive masses of record nerds the world over. In many ways, this project is the ultimate expression of the crate-digging ethos. Though there have been some watershed moments of validation for our culture, such as the Brainfreeze phenomenon and the emergence of several well-respected reissue labels, the story of Mingering Mike has implications for the disparate worlds of studio art (the covers and other artifacts surrounding Mike’s career have been shown at Hemphill Fine Arts, in Washington), digital media (Hadar initially posted his finds on crate digging forum Soulstrut.com, which lead to numerous stories on the phenomenon in well-respected mainstream media outlets), and of course, the history of independent soul. Beyond merely hoarding or cataloguing something rare and therefore interesting, Hadar and fellow digger Frank Beylotte saved a completely unique, brilliant, yet somewhat bizarre body of work from the abyss of unobserved history.

One truly commendable aspect of the book is the overarching tone: scholarly in an everyman way, amazed yet slightly bewildered, and always deeply respectful of Mike, his dream, and the resulting documents. I kept waiting for someone (there are three essays of varying length that comprise the text) to point out that Mike can’t really draw, that his grammar, spelling and syntax are all over the place, and that his enterprise, though understandable in a child, had extended long past adolescence to become more of an obsession than a hobby. That moment never comes, and the further you read into the story, the more of a hero Mike becomes. He’s an enigmatic figure, but he was a man who did what he thought was right both in his mundane reality and his fabulous alter-existence as a superstar, consequences aside. This dynamic is especially evident in the lone recording to emerge from the hundreds of pieces of Mingering ephemera Hadar unearthed.

Ever since I first became aware of Mingering Mike in the pages of Wax Poetics, I have wanted to hear the records that were supposed to be housed in those deeply fascinating sleeves. Thanks to the efforts of those entrusted with preserving the Mingering legacy, that is finally possible. The record, “There’s Nothing Wrong With You Baby” parts one and two, was recently released by the Vanguard Squad, with all proceeds donated to Mike. It is simply fascinating, both musically and physically, with packaging that is utterly faithful to Mike’s vision. It consists of three separate reproductions: a stiff, hand-glued outer sleeve with full lyrics, portraits of Mike and “D,” and no fewer than three different label logos, the heartwarming and slightly political inner sleeve (to quote: “I’m very concern with the growing rates of suicides, thefts, killings, alcolhalism, addicts, prostitutes, fakes, frauds, high cost of living…” and so on), and the similar but unique green and brown labels for each side. Mike and Big “D,” performing as The Freedom Stompers, vocalize each of the instruments in Mike’s original composition save the drums, which were mimicked by (you can’t make this up… it might be the single most essentially soulful thing I’ve ever heard in my life) beating a phone book with an Afro pick. They imitate the bass line, the melody, and both backing and lead vocals. The song itself is a sort of empowerment anthem/sly come-on to an unnamed female love interest. The sentiment, a sense of romantic idealism particular to love-struck teenagers, reminds me of another favorite recovered soul treasure, Bob & Gene’s “I Can Be Cool,” re-issued by Daptone last year. However, in this case, Mike and “D” are telling the girl that she doesn’t have to pretend to be something that she’s not, that if she’ll just be herself Mike will build her a “castle in the sand.”

Much in the manner that the covers can be appreciated in their ragged glory yet potentially serve as templates for legitimate releases, when you listen to this 45 with open ears, you can imagine a “real” song brought to life from this inherently funky skeleton. In fact, I’d love to hear one of the current soul revivalist groups bring it to life (hello, Brooklyn..?). The fact that the song was listenable at all speaks to the fact that Mingering Mike might have actually had a music career under different circumstances. With some modicum of material support, some criticism and encouragement, and a lucky break or two, he could have gone from unheard to merely obscure. In the final analysis, it seems that his painful shyness was and continues to be the prevailing force in his life. Despite that fact, he is currently enjoying a limited but enthusiastic appreciation amongst the digging cognoscenti and enlightened followers of contemporary art. One has to wonder how many more imaginary stars are lurking out there, waiting to be discovered by intrepid amateur historians.

Here’s his first (and hopefully not his last) musical offering:

HEAR “THERE’S NOTHING WRONG WITH YOU BABY”, BY MINGERING MIKE AND THE BIG D

For more info on Mingering Mike’s work, please (do yourself a favor) visit www.mingeringmike.com.