3 Dimensional Prescriptions, the new album from beatsmith Oh No and MC TriState explores the concept that music is medicine. But as with most medicine, as with most drugs, not everyone is going to have the same reaction or experience listening to their brand of medication. For some, the duo’s latest may bring about inspiration, creativity, or joy; others may get angry, sad, a little crazy, or all at once. This isn’t a one-size fits all brand of treatment. It is up to the listener to choose your own adventure.

Produced entirely by Oh No, whos comes from the pedigree of Madlib-esque inventions, the album features collaborations from stalwarts Evidence, Westside Gunn, Planet Asia, Lyric Jones, and others. This project comes courtesy of Bay Area stronghold imprint, Hieroglyphics Emporium, and is out now.

What does the title Three Dimensional Prescriptions mean and represent?

TriState: The title is like Oh and I are both kinda on some techy shit. And you know, he does his thing in the world. Everybody knows that. And I get down with the tech shit too. I work with a corporation called Hunt AR. And we do AR (Augmented Reality) And anyway, you know. I just thought it would be a good way to tie in our relation into tech shit. He does VR (Virtual Reality). I do AR. That’s the Three Dimensional side of it.

So the “prescriptions” are each song. I look at each song like a prescription. Like you need to get your fix for your addiction. Listening to one of these songs might help you. Oh No is known as Dr No so that goes into the prescription thing as well. So the doctor prescribes you medication or prescription drugs for your issues. That’s another way you can look at these prescriptions.

Can you expand a little more on the idea of 3D printing the drugs? How that makes them better, bigger, etc.

What do the drugs look like? What do they do for us?

Oh No: Well, it’s fairly simple. You have a fix for ’em, you need ’em. So it’s a vice. Like you need it to get through the day. You choose your fix. I know my tree heads can understand. Like you need to roll up every so often. We all have vices so we speaking to those vices. That’s what this project is all about2016 was a pretty ridiculous year. We lost a lot of people. Donald Trump is our president…Do you think that we need these drugs now more than ever or are these drugs that we always kinda need.

TriState: The way I feel? We’ve always needed it. I’ve needed it since I was born. I mean my parents used to prescribe me Marvin Gaye. They used to give me the best prescriptions. I grew up on the best prescriptions. Oh has too. So Donald Trump, though. I don’t even look at that situation being drastic cause that system wasn’t designed for us anyway. So you could put anybody in the White House at this point. I mean we’ve survived both Bushes. We survived the idiot Bush for two terms. We survived Ronald Reagan who put crack in the neighborhood I grew up in.

I’m from LA, South Central. So our streets were flooded with Reaganomics. That whole presidential thing. I mean if you look at the big picture, they gave you two prospects to choose from. So at the end of the day it’s like “What type of shit is that?” It should be more open. A lot of our people would say “Yo. I prefer to have Bernie Sanders .” Somebody that’s more open. The whole political thing is all bullshit. We don’t get involved with too much of that shit. At the end of the day you gon’ always need these prescriptions. It doesn’t matter who’s in the White House.

Oh No: Yeah. This is just life prescribed music. It’s for any need. When you need that getaway. Each song is gonna take you somewhere. 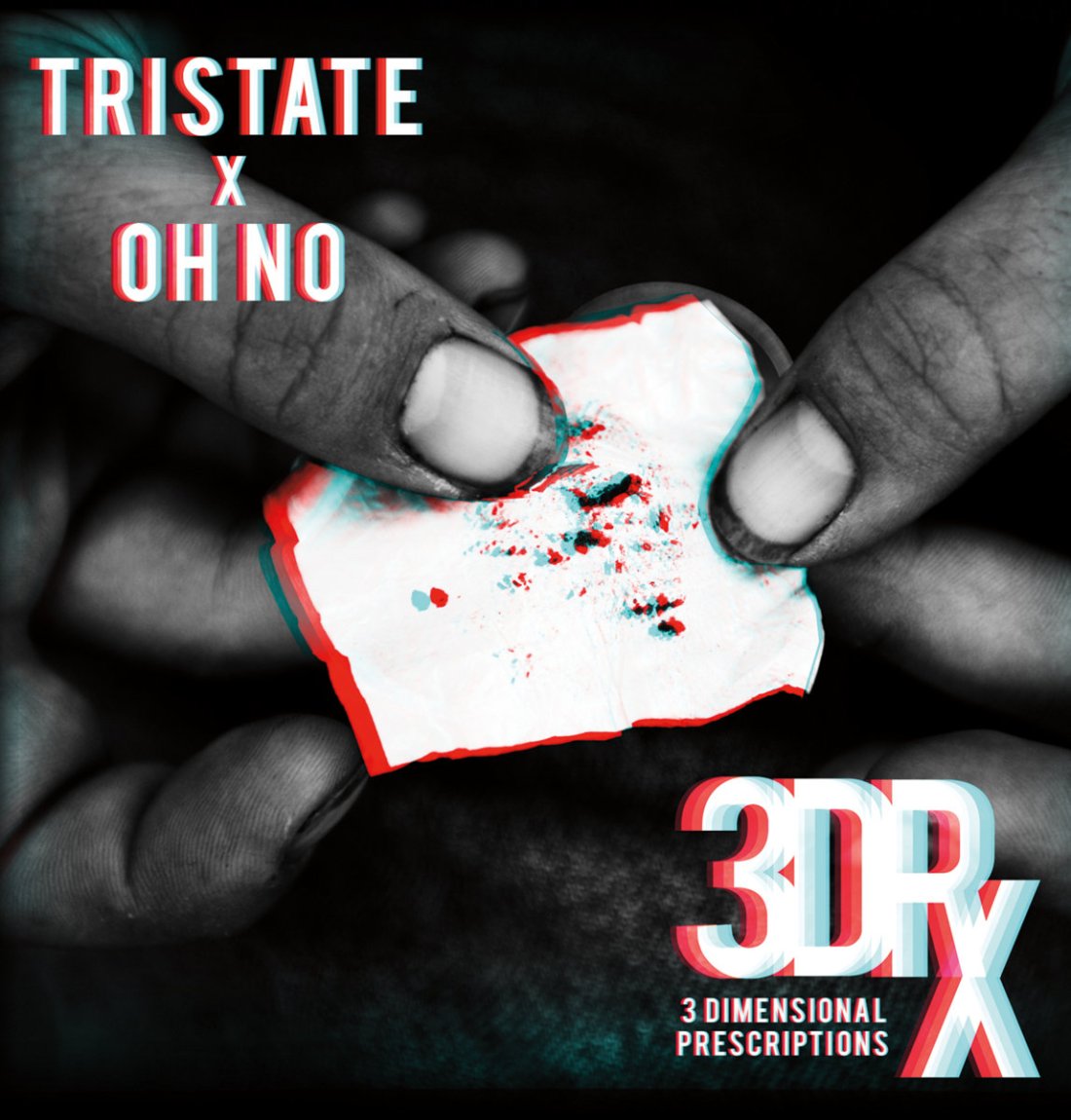 If you could create a piece of visual art to coincide with the album, what colors would you use? Would it be a painting, a drawing, a movie?

Oh No: I would say a hologram of a pill. A pill with a verse on it like small so you have to look in there. You gotta…

So what color is the pill?

TriState: That shit is like rainbow. It’s multi colored.

What does the “Showroom” represent?

Oh No, with a career that spans almost 2 decades, what have been your most favorite showroom floor moments? If you haven’t had any that you could recall — what has been your most lavish, big baller moment that you’ve experienced?

Oh No: My favorite showroom floors are the floors you don’t see.  That’s invite only custom shit. Custom everything. Beyond the shoes,clothes and, jewelry.  Normal shit.  I made a custom punch out.  Dr. No Punchout!. Damn near all the old Punchout characters in one game 2player..ripped the arcade, Nintendo, snes.. stuff that’s not for sale. I like crazy shit. Working with rockstar games and getting the VGX award for GTAV most definitely was a big moment! Sitting in the meetings and seeing how the game and music coincide.. That shit was priceless.

What was the inspiration behind “Sun Raises Son” and how can it be used in Trump’s America where solidarity between people of color is looked down upon?

TriState: Sun Raise Son is just like another way of saying steel sharpen steel. Also can be referenced to it takes a village to raise a child. In a time where we have someone like Trump in command that’s the perfect message for mankind. We’re basically just saying Unite and work together to build and don’t fall for these tactics being used to divide and conquer US.

Who did the artwork for the album and how does it reflect the music and theme of the album?

How do you think that the artwork he created reflects the music and the theme of the album?

Oh No: It reflects it exactly the way it is. You see the hand with the paper with some kind of substance. That’s basically what the music is. It’s like we’re handing you these scriptures with some kind of medication on it. TriState came with the crazy scripts. I provided a backdrop. Like say there was a drug deal scene going down (Like in a TV show or movie) and the narrator is describing what’s going on. I’m adding music to paint the scene. So I feel like all the pictures within the actual album represent what we’re trying to achieve with the scenes and the actual prescriptions and the medications. It’s like the apple. The apple is the drug of Adam and Eve.

Was “Imhotep” made before the Hotep War of 2016 between Dr. Umar Johnson vs. General Seti? If so, what is your take on something like that between “woke” black people in America?

TriState: “Imhotep” was made before the Hotep War and is simply just making a connection to one of the 1st medicine men of Kemet.

Why do you think you guys work so well together?

Oh No: When you have an exceptional dope emcee (like TriState), I’m definitely trying to catch up. I wanna try to match that.

TriState: Man, that’s how you feel about me, brother? Man, I appreciate that. Coming from Oh…You don’t understand. Like that’s success to me. Because you know I’ve looked up to Oh No. As far as producers he’s one of the fucking illest out here. Hands down. And as an emcee. I love his rhymes as well. You know what I mean? So I admire him in his realm. So for him to say something like that, you know what I mean? That’s like the ultimate…That’s what we set out to achieve as artists. Our peers, the respect of our peers. The listeners, that’s a bonus. But when other creatives can sit down and say “Yo. You’re exceptional.” That’s the level. That’s where we try to go with this.”

TriState, what came first in this process, your rhymes or Oh No’s beats?

TriState: In this process it was mostly the music. I wrote everything to the music.

The experience begins at the “Showroom Floor” and ends as the listener “Exits Thru The Gift shop.” Can you walk us through what happens in between?

Oh No: You come through the Showroom and from there you see/experience whatever you need, whatever you feel like. From there, you’ve got different doors to go through. You’ve got some options. Each door is just gonna take you to another area. It’s like picture yourself walking through a warehouse and each room is just like a different drug. You take this one over here. Bam. It takes you to another portal… And obviously as you’re exiting through that gift shop…Just like you’re on a roller coaster. I kinda look at it like that. You get in line. BAM. You get on that first thing.

So the 3D drugs are basically designed to enhance the experience.

TriState: You can look at it that way as well. Going back to the artwork…So the artwork represents different vices, basically. You see the Bible in 3D. You see an apple. You see a glutton that’s just gorging on food. It’s a whole bunch of vices. So in relation to that as well, yeah. You listen to the soundscape of that. Of life. So you start at the showroom floor you exit through the gift shop of life. It’s the same thing. It’s like life is a roller coaster. Like that popular saying. At the end of the day, I think each prescription is catered to the millions and millions of vices in the world.

Being from Oxnard, California — could you share your early Grammy predictions on your man, Anderson .Paak? If not, what are your thoughts about the rules being changed to enable streaming to factor in to becoming a nominee?

Oh No: Yoooo Anderson Paak is fire! Big salute to my G! I been checking his tunes since I first heard him as breezylovejoy. I predict he’s gonna take the “W”   Cat is pure talent! OXCITY stand up!!!! Let’s goooooO!   As far as enabling streams, streaming is the new format. Stream numbers show how popular a song is.. Streams should be its own category. Fuggit.

How do you want people to feel when they listen to this project?

TriState: I just want it to be organic. Whatever you feel…Cause Oh and my relationship is organic. It wasn’t forced. Just like music. It’s all organic. And so whatever the listener feels naturally that’s gonna be the masterful part. I can’t say that I have any expectation for the listener. I just want them to enjoy it or whatever emotion it brings about. So organically. Like you (Oh) said, it’ s a roller coaster.

If by any chance a listener were to overdose from 3 Dimensional Prescriptions — what would you guys recommend to counteract the exorbitance?

Oh No: Counteract with sleep and lots of hydration. The doctors say “take in moderation”. Per 1 play take 2 dabs, smoke 3 blunts or “as needed” in a pitch black room to see the words visually come to life.