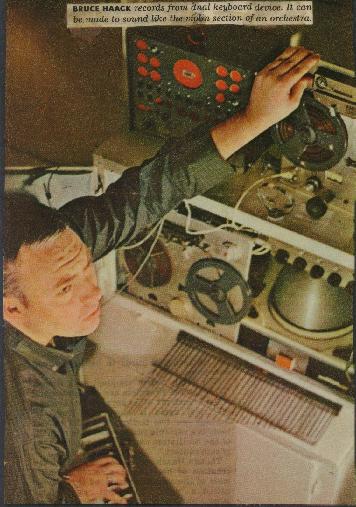 A new release further explores recent interest in voice manipulation by way of vocoders. Bruce Haack (1931-1988) was an experimental electronic musician who used a self-made vocoder he called ‘Farad’ on his recordings. He founded Dimension 5 Records, releasing strange but ultimately progressive abums, “pre-dating Kraftwerk’s Autobahn by several years” according to Stones Throw. Haack didn’t just use vocoders, he made them the centerpiece of his work, which included a children’s album, pop rock releases, dance tracks and a conceptual electronic psych-rock album called The Electric Lucifer. ‘Party Machine’ is an epic cut off Farad: The Electric Voice, the new 16 song collection which includes unreleased songs recently okayed by Haack’s estate.

* ‘Farad’ is named after Michael Faraday, an English chemist and physicist from the mid 1800s who some historians say is the ‘greatest experimentalist in the history of science’ and who contributed to the fields of electromagnetism and electrochemistry.