*Studio musician Todd Simon (of Antibalas, Breakestra, The Dap Kings, and El Michels Affair fame) wrote this on Willie Mitchell’s recent passing. Willie was a big influence on Todd, and studio musicians like him, so here are some of his thoughts. RIP Mr. Mitchell. 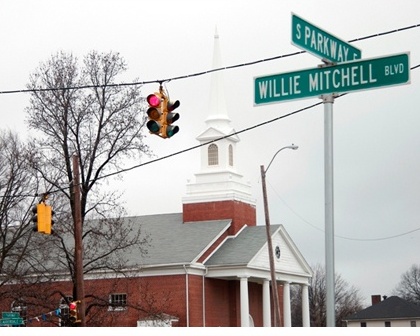 To find out one of your biggest heroes has passed away via Twitter is not fun. Five days into a brand-spanking new decade, I stumble upon a tweet from the east coast vinyl-digging monster DJ Small Change: “RIP Willie Mitchell. Can’t fuck with Hi Records real schitt.” My heart sank 20 floors.

Willie Mitchell is solely responsible for creating one of the most unique sounds from the R&B Soul movement of the ’60s and ’70s. Mitchell, who died at the age of 81 due to a heart-attack on January 5th, 2010, developed something fresh in R&B while Soul radio stations were flooded with James Brown, the Motown sound of Detroit, Philly Soul, and of course, his neighbors over at Stax in Memphis.

As in-house producer for Hi Records, “Papa Willie” produced and arranged hit after hit with Soul legends Al Green, Ann Peebles, Syl Johnson, O.V. Wright, and Bobby Bland. Mitchell also led his own band as a trumpeter and released many hits under his own name, including “Soul Serenade” and “30-60-90“. Eventually, he gained ownership of Hi Records in 1970 and continued the label’s legacy until the late ’70s.

The first time I heard Willie’s sound was on Al Green’s “Love and Happiness” on an oldies radio station around the age of nine. I had already started studying the trumpet and was blown away by the powerful and intense horns throughout the entire song. Soon to find out, my mother had two Al Green LP’s in her wonderful vinyl collection: I’m Still In Love With You and Let’s Stay Together. Little did I know that these records would go on to shape my musical life for years to come. It’s these recordings that served as reference for my first ever horn arrangements in addition to the majority of albums I’ve worked on since.
END_OF_DOCUMENT_TOKEN_TO_BE_REPLACED

Fortunate to be a part of the reissue of Pharcyde’s second album, Labcabincalifornia. Wrote the liner notes that appear in a little booklet about early Dilla, the making of the project, how the group unraveled, and the album’s tremendous legacy. Shouts to @_marcusjmoore for bringing me into the fold 🤝
Productive LA trip! Thanks to @commonwave_hifi @cutchemist @keysystemrecordings @sklutecase and everyone for being so inviting. Ideal way to finish and celebrate the reissue of To Whom It May Concern, the game changing classic debut by @freestylefellowship Nate and I were fortunate to be a small part of (did our best to document the history and articulate its importance through liner notes). Shouts to the @stonyislandpods bros @lifeafterhiphop and @open_mike_eagle for the good energy. Nice to finally meet @seandammit @hipcatscience and @kennysegal too.
Consideration of attendance is appreciated.
Wrote the liner notes for E-40’s classic Hall Of Game album. Just came in the mail! Really cool little booklet and the repress sounds 👌
👐
Did a local story on Vietnam’s first ever rock recording artist. Her songs are incredible and what a life she’s had. At 76, she currently lives in San Jose. Really grateful for her and her daughter’s time. The vinyl will be out on @sublime_frequencies this March. On one of her songs, from 1964, she wisely sings: “Look back on your journey and let things go.”