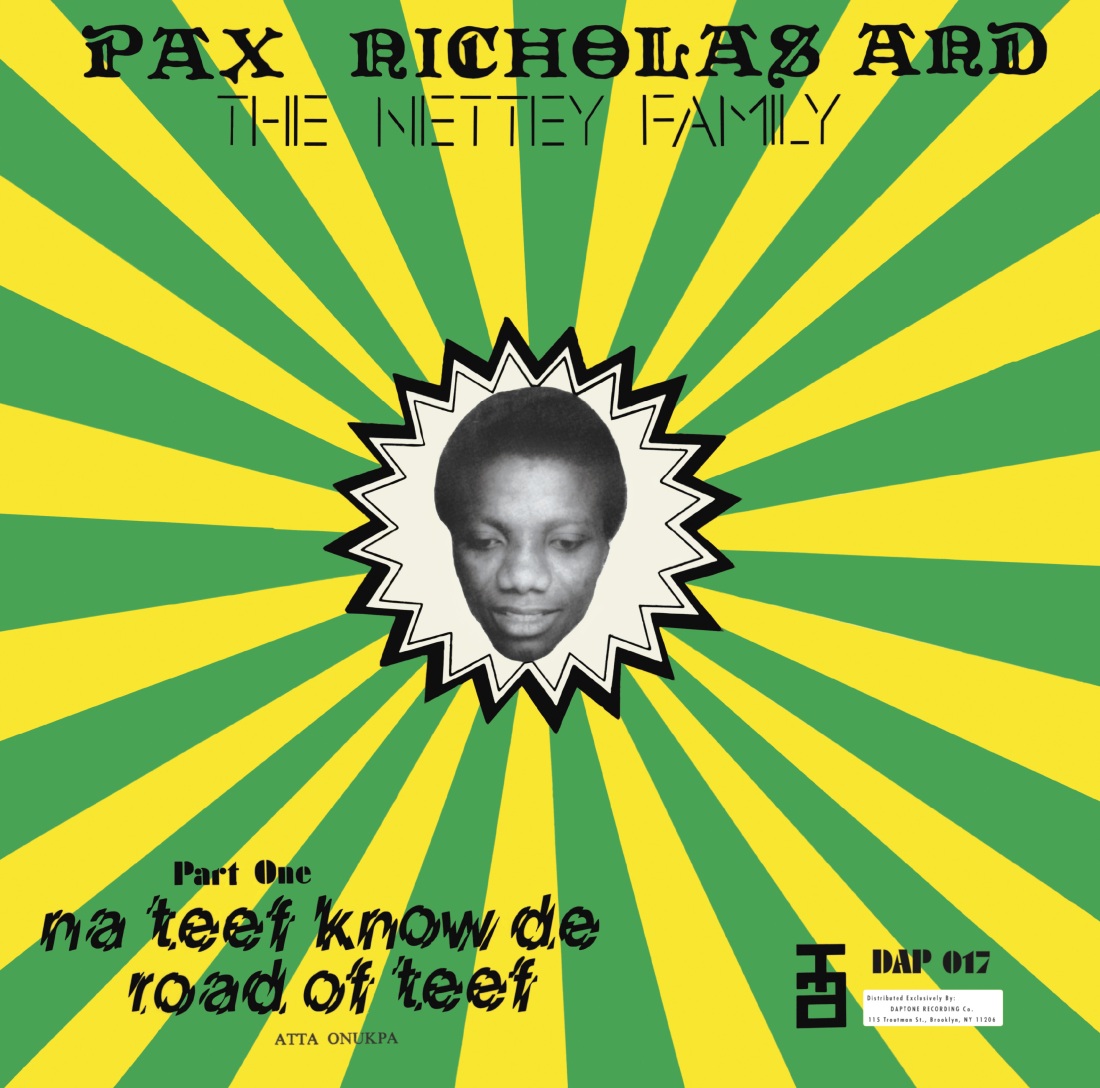 “You (snippet)” from Na Teef Know De Road Of Teef

“Pax” Nicholas Addo-Nettey’s early life was spent on Fela Kuti‘s Kalakuta Republic. He would eventually appear on all of Fela’s records between 1971-78, singing and playing congas like he had been since age 6. Eventually, a teenaged Nicholas even recorded solo projects on the side (much to Fela’s chagrin). In 1978 while at the Berlin Jazz Festival, Nicholas (along with Tony Allen and other members of Africa 70) decided to stay and avoid returning to Nigeria. To this day, Nicholas, now in his mid-50s, resides in Berlin with his two sons.

Na Teef Know De Road Of Teef, one of those solo projects Nicholas made in the ’70s, was reissued by Daptone and is out now. It was discovered by Frank Gossner, a collector and DJ who—for 3 years—scoured West Africa for records. Strangely enough, he found Na Teef Know De Road Of Teef in Philadelphia before leaving on his trip. But the record “remained somehow special” to Frank, even among the thousands of records he’d eventually find. He took it to friends at Daptone and, fortunately, here we are talking about it now.

Fela flouted convention, so it’s interesting to hear the product of someone who came from that environment. Imagine growing up in Kalakuta and Fela Kuti and Tony Allen are your bandmates? As expected, Na Teef Know De Road Of Teef is strong afrobeat with long songs that are swift and exuberant. It’s a lovely record from a young Pax Nicholas who was even lovelier when we recently spoke. Nicholas still gigs, still records with his current band, Ridimtaksi. Here are some of his stories.

How old were you when you started playing music?
I have always had an interest in music from the age of six. But the decision to go into music came to me at the age of 15 years.

Did you feel it was your life’s calling? Or were you just raised into it?
I would say, I was raised into it. When I was growing up there was a lot of music around me. In the church with gospel music, and in the community where people met from time to time to play traditional music with drumming and dancing.

How did you end up in Kalakuta?
In 1971, I travelled to Nigeria on the invitation of Joe King Kologbo and his family. While in Nigeria, he introduced me to his brother the late Igo Chico who was the main tenor saxophonist with Fela’s band- Africa 70. He then introduced me to Fela as a singer and percussionist from Ghana. Later I was asked by Fela to visit his shrine at the Surelere night club. The rest is history. END_OF_DOCUMENT_TOKEN_TO_BE_REPLACED

Really wholesome community event happening today. Consideration of attendance is greatly appreciated.
🙏🙏🙏
Just announced! The upcoming Wax Poetics coverstory features my in-depth piece with Preemo on the making of Gang Starr’s masterpiece, Hard To Earn. Thnx to the whole team and Preemo for all those hours of humoring me. Excited and cannot think of a better way to celebrate Wax Po’s 20th.
Posted @withregram • @cutchemist Welp the cat is outta the bag. This was such an honor to work on. I hope everyone enjoys when it drops in October #Repost @sklutecase with @withregram
First time hanging with these guys in awhile. Added bonus: a friend of the podcast and wildly inventive artist @fattonyrap came by just to say hi, so we took him to our favorite spot, @needletothegrooverecords. Working on a bunch of stuff but it was nice to take a second and breathe.
I could go on forever about BIZ but wish it was under different circumstances. Sad day. RIP TO THE GREATEST. THANK YOU. #ripbizmarkie