I was lucky to pen the coverstory for the last issue of One More Robot, the premiere art & music magazine out of Dublin, Ireland. For the latest one, themed the “The Crime Issue”, I interviewed Gift of Gab and Chief Xcel about one of the most colorful yet anti-crime records ever, their debut, Melodica.

It firstly reminds me of being young with a backpack full of distrust for all things radio. But it was also the pair’s first outing and still stands out to me as far as Bay Area rap goes. Pick up the latest issue of OMR and relive hearing “Swan Lake” for the first time all over again. Below is an excerpt of the transcript.- DM 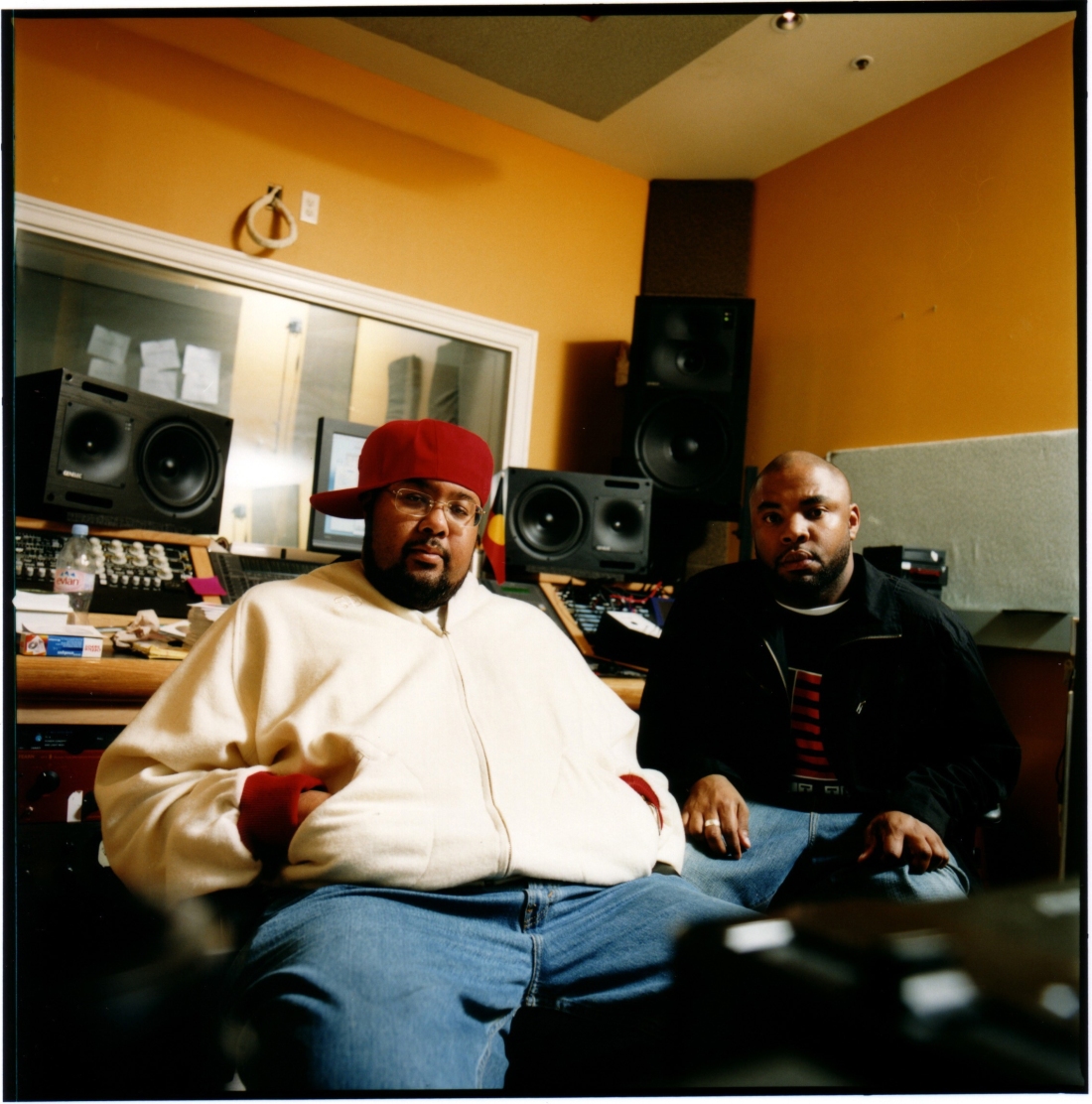 Let’s start off with basics. How old were you guys when this was recorded and about how long did it take to make?

Chief Xcel: Off and on, it took about a year finish. It was actually released as a cassette tape first [laughs]. We probably haven’t heard it since the mid-nineties.

But you guys had already recorded together prior, right?

Xcel: Yeah, we had teamed up about 5 years before we actually sat down and made Melodica.

How advanced was your studio at this point? What equipment was this primarily made on?

Gab: We were still in our dorm rooms then [laughs]. Everything was kind of makeshift. And although we all had been making music for a few years then, we were just in our learning phase.

Xcel: Basically, we used a MPC 60 and a Tascam 4-track. Not much really [laughs].

Did you two have certain concepts in place before making it? Or was the concept simply good rhymes and good beats?

Gab: It was our first project together and we had been together since high school. We were hip-hop heads and just wanted to make some sort of contribution that would be respected by our peers.

I understand Melodica was recorded mostly at Dan The Automator’s place? Did he have any influence on the project in any way?

Gab: That was at a time when our crew was young and just formed. So even though he didn’t work on the EP directly, just being around Dan definitely had an influence. I think it’s important to always surround yourself with creative people whom you respect.

What about other influences? What kind of music were you listening to during this time? The samples were obviously really obscure and not as chopped as most East Coast production was.

Xcel: We were always into Soul, Funk, and Jazz, Hip-Hop. I think around those college days we were into 9th Creation, Third Guitar, Frank Foster, and Cold Crush. I also was really into “Glowing” by Dr. John and how great the writing and arrangement was.

Xcel, this question is especially for you. As the main producer behind the project, what other beatmakers had you looked up to at that point?

Xcel: I remember I was listening to Primo. Pete Rock. DJ Pooh, Ant Banks, and Large Professor. Those are some of my favorite producers right there.

On the lyrical side of things, what went into the themes and actual phrasing of sentences for the lyrics?

Gab: Not sure. My writing always changes, I’m a true hip-hop fan so I listen to everyone, from pioneers to the up and coming. And even if I don’t like everything, I think the whole landscape is inspiring. To ask if my writing has changed is like asking if I’ve changed as a person—so of course, we all grow. As my life takes it course with natural transitioned, so does my writing.

What was the first song recorded specifically for the album? I had read there was already a gang of tracks that was just going to be chosen and put together but at the last minute you guys decided start anew.

Xcel: The first song we made for Melodica was “Lyric Fathom”. It went so well, we decided to go from there. I’ll never forget recording that at Dan’s place.

One of the album’s benchmarks is “Swan Lake”. How did it at first strike you?

Gab: It was inspiring to hear that beat for the first time. Xcel, Shadow and the crew, we all had the same vision for hip-hop and we brought together by a shared sensibility. Some beats, even from the first bar, challenge me to go in—and this was certainly one of them. That beat taught me where to go as an MC. It forced me to be my best and told me what to say.

Xcel: I simply thought Gab nailed it. It was a phenomenal verse. I’ve always liked the ‘manipulated minds need to make an escape…’

Xcel, when was the first time you heard Gab rap?

Xcel: In the 10th Grade one day at lunch [laughs]. First tune was called “Dope Stuff”.

From my talks with Shadow, it seems like he was an integral part of Melodica. How so?

Xcel: Well Shadow showed me the ins-and-outs of the MPC 60 so of course he helped [laughs].

Gab: Shadow was a big influence on Melodica beyond the beats he contributed. Besides the EP, he was very instrumental in getting us known in general.

What were your impressions of Shadow as an artist then?

Gab: Shadow was phenomenal even in his early days. He was very opinionated and passionate. The thing I respect most about him is that he’s a self-taught musicologist. His knowledge of music comes from some serious crate-digging and he’s gotten more diverse through the years and does the unexpected. I think all artists should do that. He’s a travelling man, both literally and figuratively.

Xcel: It’s important to him to not repeat himself musically and I think he succeeded. I remember hearing fragments of Endtroducing but it was nothing like the finished product.

Another producer who had a touch of influence on Melodica was James Lavelle. Talk about the track “Changes” and his input on it.

Xcel: The record that the drums come from was James’ collection. He was monumental in making that song happen. Besides providing the main sample, he really guided us through that one.

Another track that’s guided by thick drums is “Deep In The Jungle”. What do you remember about making that one?

Gab: “Deep in the Jungle” really just came about from us being young and our approach to music. We were really excited by traveling and challenging each other to create new cadences.

The song also features Latyrx. How did Lyrics Born and Lateef strike the crew at the time?

Gab: Those 2 are the most phenomenal lyricists out there. They’re the only 2 who have ever done a song like the “Latyrx” song, simultaneously rhyming around each other in the same way a horn and keyboard would.

Xcel: They’re both incredibly ambitious and sophisticated is all I can say.

Gab, this one’s for you: Break down the process of working with a detailed producer such as Xcel.

Gab: He gives me a bunch of skeletons or clips of music. I listen and choose the ones I gravitate towards, write to them, record vocals, then he takes the song back and enhances and we go back and forth until we’re both satisfied that it’s a full song.

Another big standout is “40 oz. for Breakfast”. Talk a bit about the making of it. It was a positive song during an era of gangsta rap that seemed to make it on everyone’s homemade mixtape in the Bay.

Gab: That song was inspired by tings I was really going through. When I was younger I drank too much [laughs] and would behave in ways that I would later regret.

What about Melodica are you most proud of when thinking of it or hearing it now?

Xcel: For me, this is when I transitioned from just making loops and beats to producing and actually arranging and composing. I’m really proud of the strides heard on that record.

Gab: That it was the first chapter of our legacy. It’s the fundamental snapshot of where we were artistically and as people during that time of our lives. Those were the days when we’d wake up, smoke weed and freestyle all day long [laughs].

Podcast is going super well with some potential good news coming. New episodes every Thursday. Shouts to our host @lifeafterhiphop and show’s producer @nate_leblanc. h/t @dadbodrappod
Some more nice shots of last week’s event from @sanjoselibrary & @rgdrbialaphotography. Thanks again to @pntbtrwlf and everyone who came out. #SJSU
Going thru @pntbtrwlf’s ridiculous archives right now in preparation for today’s panel discussion at SJSU.
It’s my hero’s birthday. Here’s my mom by the Metal section at our headquarters, @needletothegroove_ent. *heart emoji
1) Birthday dinner in Saigon for @dorothy247 & @tiramisu73. Not pictured: absurdly wonderful sautéed squash flowers. Missing @misaworldorder. 2) This little girl was singing traditional Southern Vietnamese folk and twisting knobs over instrumentals that were kind of psych. Crazy endearing.
Cannot think of anything more inspiring than when your pal’s new book arrives in the mail and you’re pleasantly cited in it. Thanks to (author!) @deanvannguyen for the meticulously researched book on the best rapper ever. Grab one NOW!