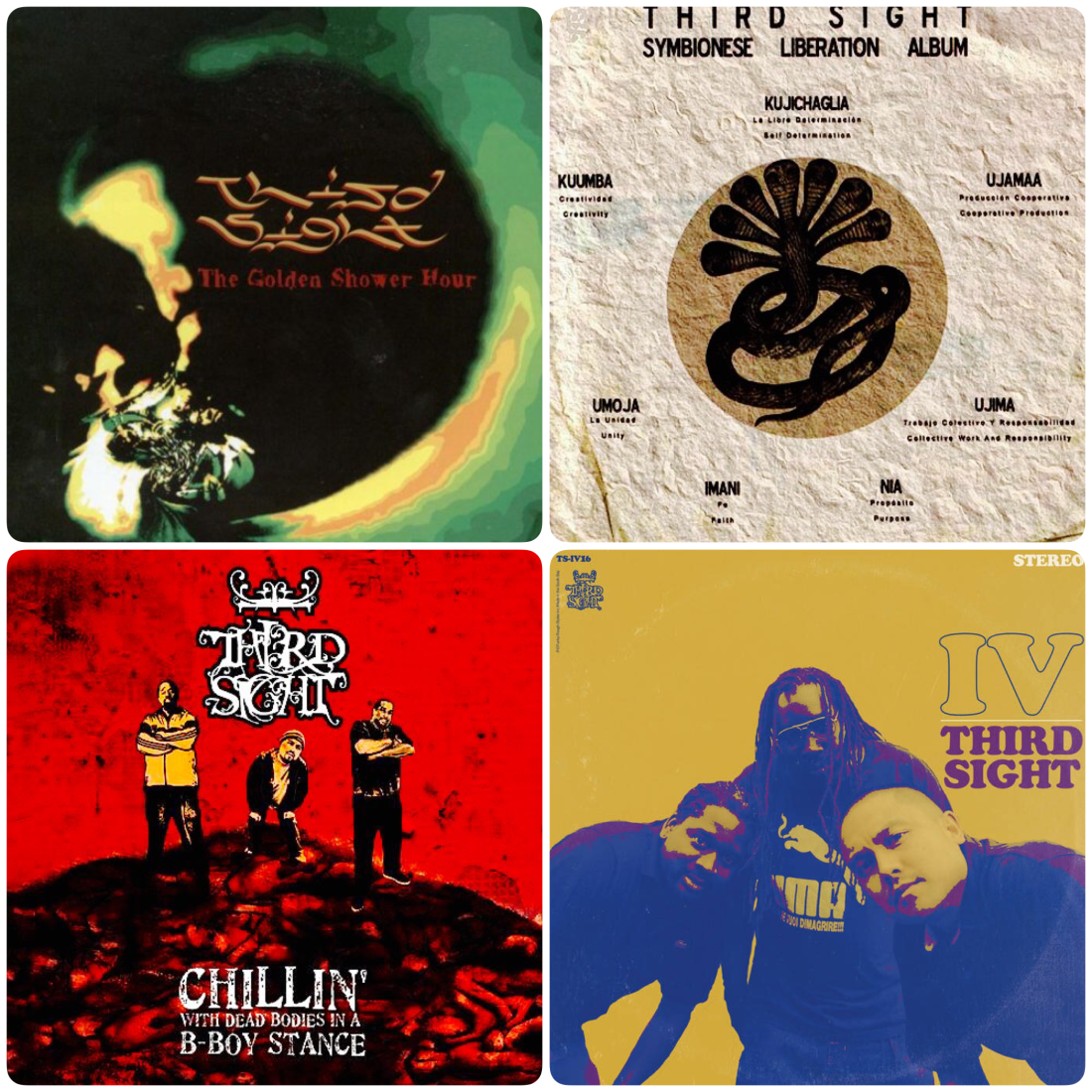 Iconoclastic rap group Third Sight has stealthily built a resume over the last two decades as one of the more prolific and consistent backpack-style acts left. They have effectively outlived the two genres with which they were initially associated— Underground Hip-Hop and Turntablism. By staying true to their core aesthetic, they have developed a dedicated fan base that is entirely too small, a committed group of record collectors scattered throughout the group’s home turf of California’s Bay Area, Japan, and Western Europe.

Is this is all that can be expected for a group that refuses to be anything but itself? Their records are defined by dark, minimal beats, virtuosic rapping and scratching, and a macabre sensibility tinged with scatological subject matter. Before embarking on this project, we knew Third Sight was a niche group, but I don’t think any of us realized how underrated and underrepresented they actually were among even hardcore hip-hop heads. They’ve never been signed to a label. None of their lyrics are transcribed on Genius. Their most-played track on Spotify has barely more than 10k plays. (For comparisons’ sake, note that Ka, an artist mining a similar minimal aesthetic, has more than 10 times as many.)

As we approached several seasoned rap bloggers, the type of dudes whose vocation is to champion lesser-known MCs, we soon learned many had never heard of them. Perhaps this is by design yet their records draw consistently high prices on sites like Discogs due to the confluence of extremely high quality music with extremely low number of units pressed.

Perhaps they are best suited to their role as perpetual underdogs, as their output is by definition not for everyone. Let’s begin with the simple fact that the lead MC, a thoughtful and charismatic rhyme animal with a unique flow, has chosen for himself the moniker Jihad, a word fraught with horrible political and ideological connotations. As a switch-up, he will sometimes refer to himself as the equally problematic (though for completely different reasons) Captain Cum Stain. Every Third Sight album features long spoken sections from the pimp-ish character Sir Limpdic. Every release is filled with the kind of dense, dizzying polyrhythms, both vocal and scratched, that are somewhat difficult to comprehend upon first listen.

So, this 10-Piece Oral History is for Third Sight fans worldwide. Enjoy the thoughtful and detailed descriptions of Jihad the Roughneck, DJ D-Styles, and the rest of the folks who’ve had a hand in this unique and engaging career so far.

I. PRE-VISION: FROM OUTTA NOWHERE

Let’s start with foundational benchmarks in your history: How did everyone meet? Had you previously already knew of one another? You two met at junior college, correct?

Jihad: I was in another rap group before Third Sight called Un-Cut Poets and we broke up over creative differences around 1990, maybe ‘91. END_OF_DOCUMENT_TOKEN_TO_BE_REPLACED

Upcoming: we’re proud to announce that a bunch of interviews and editing is underway to document the history of Third Sight– one of the South Bay area’s most long running, most dark, most contemplative, most raw, most interesting rap groups to ever come along; weird cuts and scratches of the most left-field samples coupled with monotoned, referential rhymes anchor (their now 15-year old) sound.

We’ll be speaking in-depth with MC Jihad as well as the legendary D-Styles (Invsbl Skratch Piklz) about their releases and overall musical approach. This will hopefully all coincide nicely with their upcoming album “IV”, as well as a welcomed flood of unreleased tracks slated for the new year. Calling all nerds!