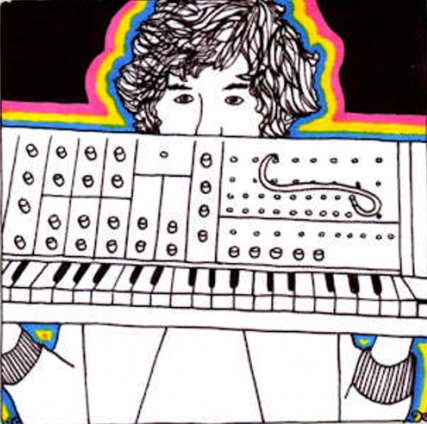 Thanks, Jet Blue. Not only for your extra leg room and getting me home alive during that one emergency landing, but for introducing me to Neon Indian. The in-flight playlist of a budget airline can be a good place to discover cutting-edge, new music. Who knew?

It was late summer of ’09, and by then, the buzz around this enigmatic Austin/Brooklyn duo had reached fever pitch. Though just a few months old, Neon Indian was already being touted by bloggers as the next big indie thing (many called them the “new MGMT”), their then-undisclosed identities igniting rabid curiosity. Somehow, the buzz had passed right by me, and unaware of their rep, I listened to these enchanting, synthy soundscapes while descending over the hyperactive night glow of my destination city, Las Vegas. The effect of the music, set against the backdrop, was deeply cerebral.

Psychic Chasms, Neon Indian’s debut album, is like a gadget that was taken apart by the nimble hands of a tech nerd and then reassembled—with a few pieces pleasantly out of place. Or like a random ‘70s movie on a dusty VHS tape that you dug out of a storage box in your parents’ basement and then ran through the latest editing software, preserving some of the vintage quality while adding modern bells and whistles. It sounds like the future—the kind of future imagined in a decidedly ’80s film like Blade Runner. It’s upbeat, it’s mellow; introspective and carefree.

It all came from the mind of Alan Palomo, a 21-year-old Mexico native who grew up in Denton, Texas and moved to Austin in 2007. It was there that Palomo, during a kind of self-imposed creative isolation sometime around the winter of 2008, pumped out a series of short tracks in his bedroom, using a small yet sufficient set of tools. When he found that they didn’t fit the style of his other outfit, the more poppier-sounding band Vega, he filed them under a new project with collaborator Leanne Macomber, the project now known as Neon Indian.

Recently back from a worldwide tour—including three sold-out shows in New York City—Palomo shared the story behind the buzz with NERDTORIOUS.

What was it like for you, moving to the States from Mexico at age six?
Definite culture shock. It was a complete immersion process. I have these vivid memories of being in all-English classrooms and having these really specific moments where I didn’t know how to say a certain word. I remember this kid had accidentally spit on me and I was trying to tell the teacher, and all I could come up with was, “His mouth water was on me!” Because I didn’t know how to say saliva. At the same time, as a result of that, I got assimilated pretty quickly. I think I learned English in maybe 8 months to a year. It’s nuts how, when you’re little, you pick up a language like it’s a video game or something. END_OF_DOCUMENT_TOKEN_TO_BE_REPLACED

One of the world’s oldest literary magazines, The Paris Review, known for their historical coverage of Faulkner, Hemingway, Kerouac, and others was founded in 1953.
New issue of @wax_poetics landed! Exquisite; glossy, thick stock, incredible photos and impeccably laid out.
✊️
"I always wanted to take my mother to the Grammys and now I will."
Really stoked to get these in the mail. Both will be put to good use for some upcoming projects. What’s better than books in your mailbox?
Thnx Nate and Paul 🙏